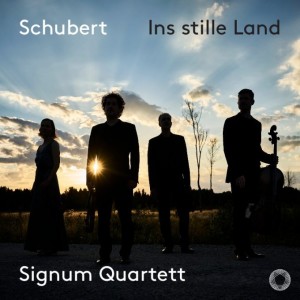 …one of the most sensitive interpretations ever recorded.

“The Schubert Experience and our Schubert albums offer an unusual and perhaps slightly eclectic pairing of famous music with lesser-known but equally beautiful music. By combining string quartets with lieder arranged for string quartet, we have aimed to show how Schubert’s instrumental and vocal music cross-pollinate each other. The concept for this album grew out of the Schubertiad, where chamber music and vocal works would be heard side by side in an intimate setting. In choosing the repertoire, we also looked to surround the quartets with songs written around the same time as the quartets themselves, highlighting the stylistic similarities despite the difference in genre. In choosing the lieder, we purposefully selected songs that needed as little “explicit” arrangement as possible: We wanted to have the sense that they could have been written for quartet – that they could have been written for nothing but quartet. The fact that Schubert quotes openly from his own songs in his chamber music underlines the strong connection between the two, and with this project we hope to have taken this connection a step further.”
Xandi van Dijk

The Schubert Experience in concert

The Signum Quartett offers a Schubert cycle in three parts: All the late string quartets, the string quintet, Lieder arrangements, readings from the letters, and a discussion about Schubert’s life and times.